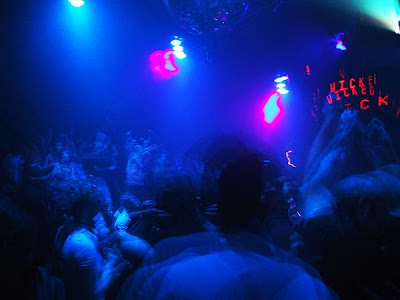 Wicked. How can one describe the magic? Wicked was based around four English DJs that threw parties in San Francisco from 1991 to 2004. They continued the debauchery and hedonic musical tradition of 1960’s Haight Ashbury. SF is a strange place, there are a lot of psychedelic and far out people there. Wicked brought some of us together. The music was the guide, a uniting force as we explored ritual magic and ancient rites together. And we danced. A lot. To house music. The celebration of the heartbeat. Everyone from homeless Grateful Dead lot freaks to gangsters in Kangol gear to old school disco lifers would be getting down together. I remember coming out of the club one morning and a black dude in a perfectly pressed suit was casually strolling out the door, and out of nowhere he busted a full on flip and just kept walking. He had some magic spring in his step. Did I just see that?! That’s what it was like. Stuff like that happened all the time. A friend was recently recalling his favorite moments- at the end of the party when the music stops and the lights come on. Then the crowd yells and yells until one last joyous track is played, often times disco or an 80s obscurity. At first the parties were outdoors on the beach or in the woods during full moons. When the crackdown commenced on those they moved into clubs: King Street Garage, Jessie Street, DNA Lounge, and a long residency at 177 Townsend. They would always bring in their own sound system and had SATSI doing amazing light and video work. They brought out guest DJs on occasion: K-Alexi, François K, Rob Paine, Joe Clausell, Doc Martin, Harvey, Mike Clark, Stacy Pullen, and many others. The following are some thoughts on each DJ, memorable sets, and links to some of the best music you’ve ever heard. 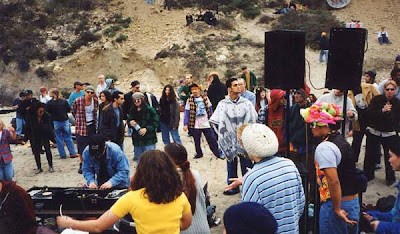 Jeno. The shaman. Silent and powerful, he spoke through his music. A Magician of the highest order. Every set he played was better than most other DJs sets I’ve seen. Out of the four, he was probably the most consistent mix tape releaser. Inside the Mind, Bang the Drum, and Rise are excellent examples of the dark psychedelic house vibe that Wicked represented. He also always played great daytime music at the free Sunset parties. I saw him a do rare non-house set once- barely anyone was there. It was unbelievably dope. Check out his Noise from the Void radio show to hear what he is currently up to. EZESkankin mixtapes hosts most of his classic mixes. Inside the Mind is my favorite. Side A. Side B. 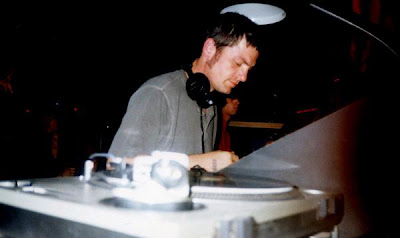 Markie Mark. A master. Expertly crafted mixes. I saw him probably once a month for 6 years- every time just perfection. He really knew how to take it deep... The djs dj. The backbone of Wicked. Best set? Turn this up really loud. He didn’t release many recordings of his DJ sets in the later years, this is a rare promo CD he sold me. He has since retired from DJing and is a Science teacher. The recording is from September 28, 2001. 177 Townsend, 5 to 7am slot. 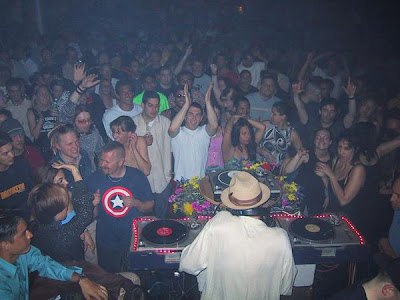 What can you say about Garth? Extremely dynamic. Everything goes. Dub sets…Deep sets.. Disco sets…the world of Garth is wonderful place to be. He wrote some classic jams for his Grayhound label. Most memorable set? I missed the early Full Moon parties that I hear were transcendental. For me, it was probably a Townsend session when I was super super high on acid. He took us on a very deep unified psychic journey, as it usually was at those parties when a lot of people were high (often). Unexplainably mind-blowing. Another time, in a little brick loft in the Tenderloin, he did a guitar based disco rock set and tied all the records together by jamming solos. That one accidentally wasn’t recorded but here is a link to an old tape from 1998, live at Come-Unity. Side One. Side Two. 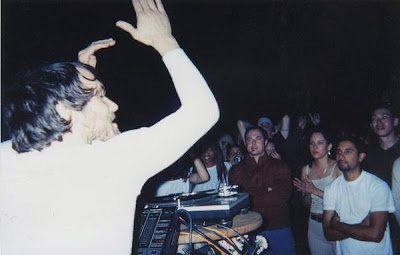 I have never seen anyone rock a party like Thomas. He usually played first or last. I was once told the other guys thought he was too unpredictable and wild to play in the middle. Not sure if that's true but he was certainly different. “The crazy one”. “The Mad Scientist". His energy is so incredible and his selections so forward thinking. He’s been inventing styles for years. Lately he has heavily cut back on his DJing to concentrate on producing. His newest project is Food of the Gods. Best set: Probably the first Rubntug party in LA. Heads came out of the woodwork for that one. The vibe was intense. I asked Thomas about it a few weeks later and he said it was one of the best parties he had ever done. Also, the set at the Wicked party Eye of the Tiger when he stood on the turntables and yelled for 15 minutes at 6:30am was the greatest DJ performance I’ve ever been a part of. Links to that set are below. When listening, keep in mind this was when 2-step was new, the disco revival hadn't happened, and when electro clash was just starting. No one had heard Playgroup or Peaches yet. Part One. Part Two. He began by stopping the relentless thumping and started tweeking the lights. The video screens got way trippy. He panned sounds around the room. The combination of these elements made the vibe electric. You knew something special was happening. He stared at the crowd and made eye contact with everyone in the room for the first track or two. He told a story with this set of tracks, Larry Levan style, but here every was seemingly about what a badass Thomas was. Later things got crazier. At a few points he stopped the record and jumped up on top of the turntables and screamed. "Whats the name of this jam?"  "Wicked" In the first minutes of part two on the mix, through the needles, you can hear him and the crowd yelling at each other. It got pretty intense, I remember looking over and seeing a punk looking kid yelling "Express yourself mate!!" The lights were on and the club was on the brink of a riot when he jumped down and dropped Zongamin's Serious Trouble, a devastatingly sick track on a proper system. A mental morning. Wicked. 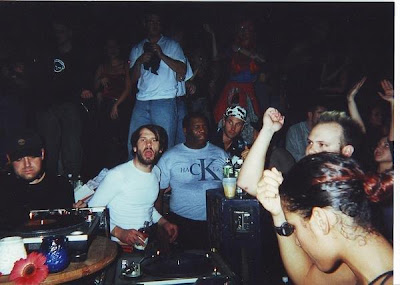 All pics courtesy of the amazing collection at Wicked Myspace.
Posted by Signs of Life at 3:56 PM

nice read. wicked was always my favorite as well. i lived in LA but went to a few and always went out when they brought any of them down to Together...

Thanks for posting these mixes. Some gems for sure.

I agree - the greatest dj set I've ever had the privilege to be a part of.

this is my favorite blog you'e written. Garth even gave you nod! Wicked is Dead. Long Live Wicked!

Thanks for posting these - such crazy memories! My friends and I used to call Garth, Jeno and Markie respectively The Judge, Jury and Executioner, and when Thomas was around he was The Jester. I first started going to their parties around spring of '91.

It was always Markie for me - I loved Jeno, but Markie definitely had 'that thing' - perfect mixes, incredible selection, and the three of them when they were in sync were unlike anyone I've ever heard.

I loved that you could always (at least I could) tell, if you weren't looking at the booth, who was playing and the transition between them.

P.S. Did you ever hear Moonrise, Markie's 3-deck mix? Incredible...

Your blog is a good read. Was in SF for 9 years and through those years, went to many Wicked parties...
Thanks. :)

I agree about Moonrise.....seems to me he did most of it at a Full Moon party out near Crockett. The tape was just a lost memory for me for years...then it surfaced as I was moving and going through stuff. Its the only mixtape I can listen to over and over and hear something new each time.

Wicked was my favorite of all the parties that really was my life from about 89-93. Always my favorite DJ's and I saw alot. The magic that ws spun at some of those parties was life changing. Full moon -Gray whale cove. best time ever. Who was my favorite. Hard to say. Jeno always took me there, but Garth and Markie did amazing things too. Thomas was hit amd miss but when he was on it was the shit. Great days, great times. Miss the people and the music.

Wow, thanks for bringing back memories I'd forgotten I'd had. Great read.

Thank you for your post. it really open my mind how about wicked party is. and im from Indonesia really appreciate "wicked!!" music!! the mixtape is the best!!

Mmm...Wicked. I loved the Wicked parties. I had the privelege of being in California from early 92-94 and was the best and worst times. But ALWAYS, Wicked put on some of the BEST shows. I followed the dj lineup to the raves and the clubs. I have the Vision tapes from the Gathering in Livermore.

interesting read, thanks for this :)

Could you reup that Jeno mix?
your description made me want to download that one, but the links are down :(

Sooor, I fixed the link to Inside the Mind.

Thanks a lot for post can u tell me ur opinion about this dj pack
www.lucidsamples.com
Is it worth my penny?