Posted by Signs of Life at 1:47 PM No comments:

These are two of the universe's finest songwriters performing one of thee most exquisite tunes ever written, live in concert.
These two lovers have been solidifing their love through song since the 50's. They started composing for Motown, writing classics for Ray Charles and Diana Ross before they left the label to start releasing music under there own name. Ashford & Simpson are the only ones that perform at this level that we are aware of at this juncture in time.
Posted by Signs of Life at 11:05 AM No comments: 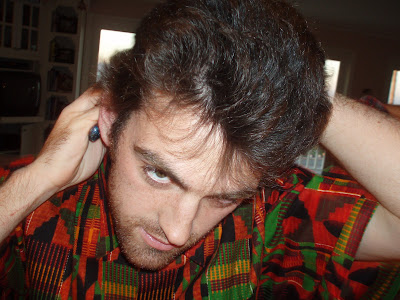 Tristan aka Trick, is my little brother. He lives in lower Nob Hill in San Francisco where he is learning to be a teacher. He has more style in his belt buckle than you have in your whole wardrobe. He showed up for Christmas dinner looking like a 70's African hillbilly and I had to capture the look to share with you. Our mother was firmly against posting these pictures. Ladies, give him a call at 415 608 6335. 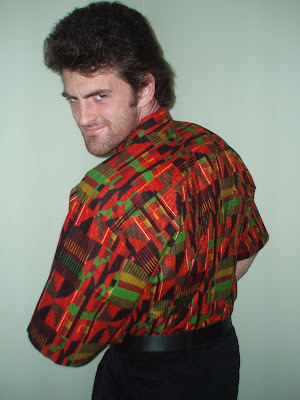 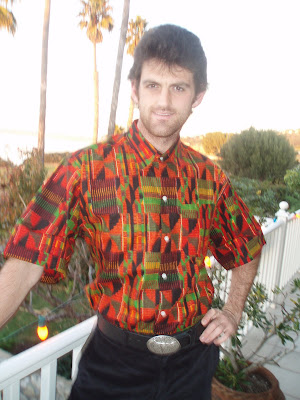 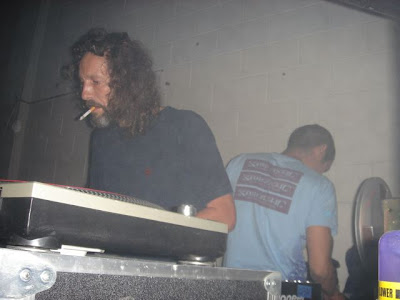 The latest Harvey party was last weekend. Paul T and company found an exellent new space in east LA. The heads came out of the woodwork and were ready to party. We did. The crowd was going off all night, yelling like crazy for each little change in the music. Harvey made amazing use of his 1/4" tape dub delay system all night long, really tripping people out with it. He took the music unusually deep this time. Not soft, sensual deep; but dark, on the edge of sanity deep. It sounded like a lot of 90's records from London or something. Some of the artists he played throughout the night were Voyage, UFO, Still Going, Visual, Chris & Cosey, Edgar Winter, Mandy Smith, Paper Dolls, The Osmonds, Reverso68, and he even broke out the very first Black Cock edit. When the lights came on at the end of the night he played Music of Life by Cerrone. It sounded amazing on the Sarcastic Sound System. My friend who has been seeing Harvey play forever said it was the best set she's seen him play. That means this was some of the best music ever, and it definetly was. Get in touch if you want to come with us next time. 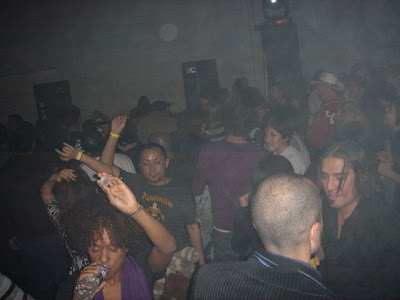 Photos by Kerry.
Posted by Signs of Life at 10:27 AM No comments:

Warren's Song of the Month 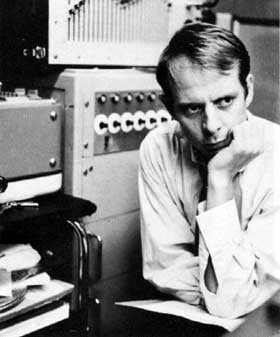 One of the great musicians of our time died last week. He was one of the furthest out composers ever. Karlheinz was one of the first to apply concepts and philosophy to classical music. The resulting music is now referred to as 'new music' or 'experimental.' His works were highly conceptual, extremely complicated, and very challenging to understand, and at times, to listen to. Stockhausen wrote the first piece of published electronic music. Like his contemporary John Cage, he worked extensively with chance in his compositions. He composed hundreds of works in his lifetime. His piece Stimmung simply held a B flat ninth for 70 minutes. His work Gruppen was for 3 orchestras playing simultaneously, slowing shifting patterns. From 1977 to 2003 he worked on Licht, a cycle of seven operas, each based on a day of the week. The piece was over 29 hours long. A performance of Licht requires a string quartet in four helicopters hovering above. I could go on and on about the ideas behind his works. If you want to know more check out his wikipedia page.
Posted by Signs of Life at 1:41 PM No comments: 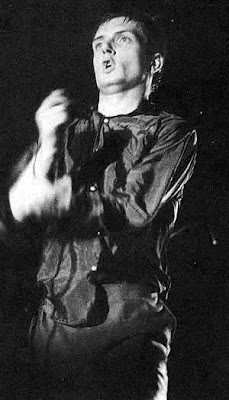 This is Ian Curtis' story told by people that knew and loved him. It is based on his wifes recollections of him, as she also produced the film. This is the best recent use of black and white cinematography I can think of. They shot in color then transfered to B&W because it fits the streets of Manchester and the mood of the film better. This was beautifully shot in the exact places Ian grew up. The actors do a great job. Sam Riley does the legendary Curtis dance well, and Samantha Morton is incredible as usual. This is not an uplifting picture but super inspiring nevertheless. 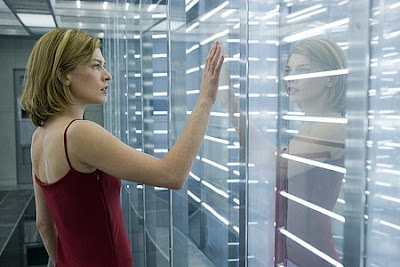 This was pretty good. The production design was incredible, the sets looked awesome. The lighting, cinematography, and overall tone were impressive too. They rehashed the 'post apocalyptic last humans on earth battling the undead' plot for the hundredth time, but whatever. You know what your getting if you sit down to watch this. I watched it online at 4 in the morning. Milla Jovovich is pretty rad, I read she is the highest paid supermodel in the world (10 million a year.) There are tons of cliches and faults with this movie but if you wanna zone out, it's pretty scary and fun. 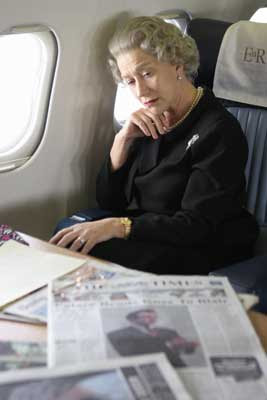 Finally saw this. It's interesting because the actors are playing living people experiencing recent events. I didn't realize the extent of the controversy in England regarding the Queen not publicly reacting to Dianas death. I guess they didn't even like her. Tony Blair comes off as the idiot he is. The film is a good guess at what life is like for the Royal Family. 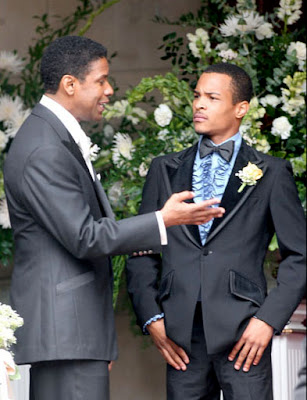 Pretty standard stuff. Drug dealer vs cop and the dealer eventually gets popped and narcs. But definitely worth watching. I am sick of Denzel doing the same shit over and over but oh well, better than Will Smith. Props to the script by Steve Zallian, the Don. No easy task putting that together, the man is a master. I hate to say it but I think T.I. is a WAY better actor than RZA. 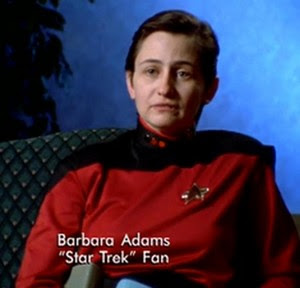 Holy shit! This is awesome! I got it for a dollar on VHS from my local library. This is a classic documentary from before documentaries were popular. Informative, weird, and thought provoking. Laugh out loud funny too. I find it inspiring how dedicated these nerds are. The girl in the picture is my favorite.
Posted by Signs of Life at 4:35 AM No comments: 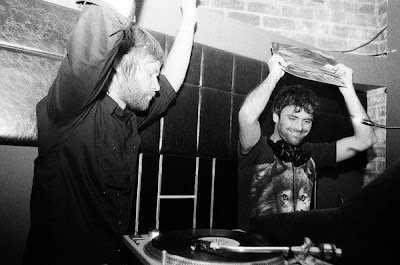 Mixed Live by the Brothers K

It's Immaterial - Driving Away from Home
Front Line Orchestra - Don't Turn Your Back On Me
Eddie Kendricks - Girl, You Need A Change of Mind
Womack & Womack - Love Wars
Ashford & Simpson- It Seems to Hang On
ABBA - Lay All Your Love On Me
Marianne Faithful - Broken English
Central Line - Walking Into Sunshine
Man Friday - Winners
Postive Force - We Got the Funk
Peter Brown - Do You Wanna Get Funky With Me?

Photo by Doug Port
Posted by Signs of Life at 5:08 PM No comments: 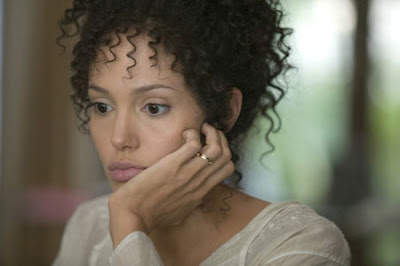 Not my cup of tea. This movie feels like watching the news. A bunch of middle eastern babbling about a missing guy. No development, suspense, or interest at all. The editing is what really ruins the movie. There isn't one scene more than four or five seconds long. It's impossible to think about whats happening when the edits are so quick and annoying. I imagine the director or editor got his start at MTV. Angelina Jolie is boring. Just because she styled her hair differently and does a bad accent does not make her performance note worthy. This movie sucked. 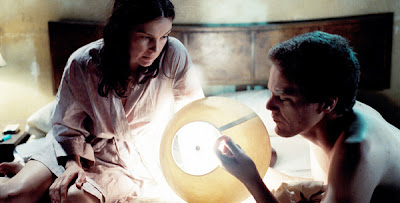 This was an interesting film about paranoia and schizophrenia. Very bad title decision as it has almost nothing to do with bugs. They are a metaphor for one mans insane delusions and a woman's drug induced hallucinations. It's directed by William Friedkin, who did The Exorcist and based on a play by Tracy Letts. Ashley Judd and Michael Shannon give excellent performances. If you have ever known anyone crazy or totally strung out, this film might get under your skin. If you haven't it probably will too. 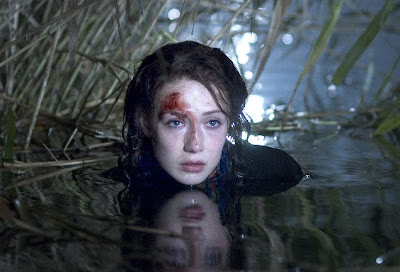 This is about a group of Resistance fighters in Holland towards the end of World War Two. A woman's family is wiped out by Nazis and she goes undercover to free some captured comrades. It's a long movie but interesting developments occur enough to keep you locked in. If you have a problem with subtitles, beware, this is in Dutch and Hebrew and the plot moves quickly. But I suggest you learn to read better, because most interesting films are in other languages. There are a couple bullshit moments that are worth just looking past, but most of this film is pretty engaging.

No Country for Old Men 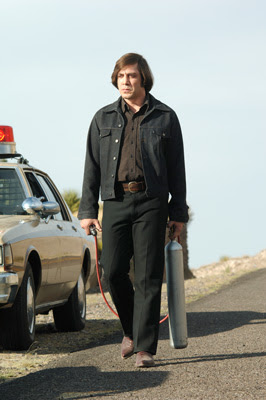 Whoa. The Coen Brothers are back. They have created one of cinemas great villains in Anton Chigurh, played by Javier Bardem in a phenomenal performance. This dude is evil. Deranged. Smart. Psycho. The haircut!! What an inspired call! (Aparently from an photo of a Texas brothel patron from the 1890's). His clothes and weapon round out the freakishness. The way the Coens build suspense is incredible. It's not so much what the film's about, but the way they do it. I really like how they left a lot to the imagination. So much so, that at my showing people booed at the end. I guess they were excepting a tidy Hollywood ending and instead they got thoughtful, provoking dialogue. One of my favorite parts is the fade to black they use after Llewelyn Moss meets the girl by the pool. That was one menacing fade out. 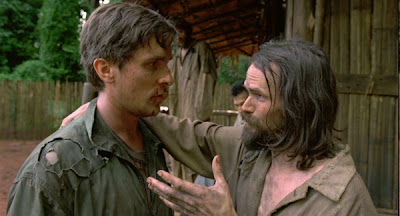 Werner Herzogs telling of Dieter Denglars story. It is the true story of a man shot down and taken prisoner in Laos in the 60's. I wont tell you more, just see it. This one isn't as stylized as Herzogs other features, as he ops to tells Denglars story strait up. No war movie bullshit here, it is barely about war. It is about survival. Mind blowing acting by Jeremy Davies, Christain Bale, and Steve Zahn. Herzog does it again. Do not miss these masters at work.

The Future is Unwritten 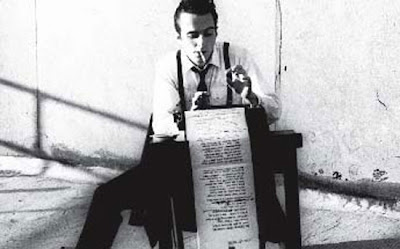 This is about the life of Joe Strummer. For a movie about the Clash just watch Westway to the World. It's awesome. If your really into Strummer or the Clash watch this. It details his entire life. From his hippie beginnings to his hippie endings. And a whole lot of punk in the middle. My favorite part was the end when he got into dance music and raving. There's some rad footage of him getting down around the campfire at parties. An inspiring story.
Posted by Signs of Life at 2:10 AM No comments: