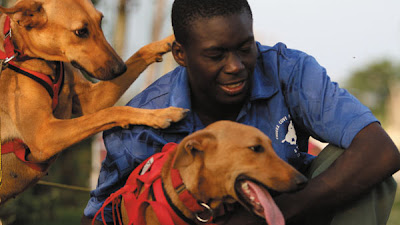 So you’ve heard of the Jamaican bobsled team? Well this was a documentary about the Jamaican Dogsled team- a film made for and by dog lovers. My girlfriend giggled and made those sounds that girls do when cute dogs are on screen throughout the entire 1 ½ hour running time. That was the best thing about this movie.

A white haired Jamaican man had a crackpot idea to start a team and soon garnered the support of the likes of Jimmy Buffet. He and his people went to a pound and rescued some mongrels. They found an upstanding young Jamaican man that was good with animals to be the “musher”- the guy on the sled controlling the dogs. The first hour is spent getting to know the various dogs- Smiley, Squeeze, and so on. We follow the young Jamaican musher as he leaves his homeland for the first time to train in Minnesota with a 30 year mushing veteran.

The team starts to build up to their first race- in Scotland. Around this time the tolerable film goes seriously downhill. Turns out our smiling mushing hero isn’t such a beacon of light after all. Off-screen he takes one of his bosses cars out for a joyride and crashes it. He is kicked off the team. I would have kept him on for the sake of cinema- especially when, I can almost guarantee, the creator of the dogsled team financed the film. But, no, they kick him off the team and send some other guy with no training to Scotland. The worst part is the dogs don’t get to go to Scotland either- they wouldn’t be allowed back into Jamaica if they leave. The whole message of the film up to that point was dogsled racing is about the relationship between the musher and his animals. So now we have an inexperienced guy we don’t care about racing dogs we have never seen before at the supposed climax of the movie. I kind of admire it’s realism but the scenes are awkward to say the least. They are obviously not wanted at the Scotland race. Though it is not said out-right, the Scots and the other teams think the Jamaican musher and his and his entourage and camera crew have shown up to make a mockery of the serious sport of dogsleding. They finish 47th with the new musher arriving at the finish line crying full blown tears with an injured dog in the dog bag (the rarely used little bad attached to the sled for emergencies). The Scots run up to help the dog yelling “oh my god- what did he do to you!” as the man stands there ignored, beaten, and broken. This scene is both a testament to the dog fanaticism of these racers and the failure of humanity to help one another.

Anyway, the film ends with a montage of dog-osophy with the main characters reflecting on the importance of saving dogs and Jamaican pride. The movie, which is available to watch on Youtube, contains some good insights into the nature of the relationship between man and dog. The Jamaican Dogsled Team definitely built something from nothing that saves dog lives and helps their local economy. But does this make for a good documentary? No. If you love dogs, I recommend watching the first 45 minutes for some solid dog porn. If not, don’t bother, I already told you what happens anyway.
Posted by Signs of Life at 2:11 PM No comments:

The Boss of It All 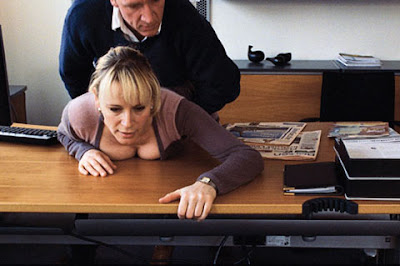 This is one of Lars Von Trier’s experimental movies that plays with convention like The Idiots, or The Five Obstructions. He appears as himself in these films- either adding little narratives or by purposely showing the camera crew in the reflections of windows. This one is his attempt at a genre film- a comedy. It succeeds as a funny movie and would probably is hysterical if you were Danish.

An out of work self-important actor is hired by the boss of a software company to pretend to be the “boss of it all” that no one has met. That way he can blame him for all the fucked up stuff he does- like selling off the company and firing his all his employees/investors/developers without compensation. Of course the actor going into this gig doesn’t know this and throughout the film he struggles with the dilemma of sticking to his “role” and doing what he is told- and fucking the unknowing employees over. The movie ultimately deals with ethical questions. And the end is really a jab at the art of acting. It really works largely because the guy playing him, Jens Albinus’ (Stoffer from The Idiots) performance is perfectly perplexed and laugh-out-loud funny.

Trier used a technique called Automavison, probably something he made up or helped develop. He establishes a scene, points the camera at the actors, and then lets a computer select the angle, movement, pan, tilt, and zoom of the camera. Then they shoot it. So in the final product there are a lot of jump cuts but it makes for interesting viewing- and occasionally you come across some amazing unintentional compositions that are striking.

If you like the weird shit Trier does- I imagine you will like this- I think it’s among his best work. Or if you want to see a superior and subversive office comedy and you don’t mind that it’s in Danish- check this out for sure.
Posted by Signs of Life at 2:08 PM No comments: